Topher, labeled The Chris Wannabe, was a contestant on Total Drama: Pahkitew Island as a member of the Pimâpotew Kinosewak.

The junior sadist Topher is enamored with Chris and is overly complimentary of his hosting skills. Topher begins offering suggestions on how to make the challenges extra painful "You know what would make an excellent TWIST for this one?" (his teammates hate him but Chris takes a shine to him.) It all changes when Topher starts to dress like Chris take over Chris' hosting duties every chance he gets. Chris starts to worry that Topher is angling to be his replacement, and that the network might be looking for a new younger version of Chris. So Chris starts acting young to prove he doesn't need to be replaced​.

On So, Uh This Is My Team?, he is thrilled to be in Chris' presence. He is so thrilled that during the challenge, he bows out for a bit, just so he can watch Chris close to a commercial live. He is eventually thrown off the cliff by Chris, to only be dragged back into the challenge by Jasmine.

Topher is becoming more pleased with Chris in I Love You, Grease Pig. Topher zip lines across his part of the challenge with the pig, looking directly at the camera. He even at one point tries to close off for a commercial, but is cut off by an annoyed Chris.

In Twinning Isn't Everything, he seems to be at joy when the twins are arguing at breakfast. During the challenge, he does not contribute at all, as he is too busy complimenting Chris and obsessing over him. He even gives the host tips on how to host better, annoying Chris.

In A Blast From The Past, he is in awe with Chris's windblown hair with the yellow background that Chef provided. He the first to do the challenge for his team, and he rushes to get the paddle, covering his face and running back to his team cowardly (with Dave doing the exact same thing), both getting a point.

On Mo' Monkey Mo' Problems, he tells Jasmine that he will be back, as he plans to steal Chris' phone. He bumps into Chris and takes his phone, as he calls a producer to tell them that they need a younger host for the show. He returns to his team to help out, proving to be of decent help, and is annoyed with Max (with the rest of his team just as annoyed). He still manages to make it to the bottom 2 with Max, but is spared.

In This Is The Pits!, Topher seems very shocked when Max is burning the ants that were on him and even more shocked that Max managed to burn the bed. In the challenge, Topher saves Jasmine from something falling and gets trapped with Jasmine and both have to look for an escape route, and they become friends over the process. He and Jasmine face many obstacles, but make it out and are the first to land in front of Chris, Topher cheers when no elimination is declared.

Topher yells "Good Morning Campers!" with your cat (Chef) in their Audition Tape

Topher scared of the pig. 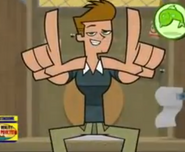 Topher using the confessional for the first time.

Topher being electrocuted with his team in I Love You, I Love You Knots

Topher and Team Kinosweak after losing their first challenge

Topher listening to Chris in episode 3

Topher going up against Dave in the Smash, Splash, 1-2-3 X-dash

Jasmine and Topher in This is the Pits!

Scarlett getting a marshmallow, while smirking at Topher, who does the same in return.

Topher is about to be fired from the Cannon of Shame.

Scarlett snaps at Topher
Add a photo to this gallery

Retrieved from "https://tdspoilers.fandom.com/wiki/Topher?oldid=17319"
Community content is available under CC-BY-SA unless otherwise noted.