Sugar, labeled The Pageant Queen, was a camper on Total Drama Pahkitew Island, as a member of Waneyihtam Maskwak.

Sugar is a wannabe pageant queen with a heart of darkness. Sugar hails from a farm outside of Lloydminster, Alberta, or Saskatchewan. "You can see either cause it's a provincial border town!" A sweet and seriously cute dumbbell who signs up because she thought Total Drama was a pageant, and it takes her several episodes to realize it isn't - "When's the talent portion?" When she hits the dock in her bathing suit, she struts like she's on a runway for the swimsuit portion of a pageant. She speechifies like a pageant competitor, repeating every question she's asked before launching into her answers with pageant-isms like "I personally believe..." She has an intense regimen for always looking gorgeous, goes to sleep in curlers - but eventually it all falls apart and she reverts to her true self, and only makes half attempts to clean up for the on-camera portions of the show. She's a little big-boned and isn't shy about loudly sharing her opinions and bizarre family expressions.

When she is falling in So, Uh This Is My Team?, she finds a crown in a bag, and she reads her pageant speech. She is seen getting annoyed when Beardo makes a farting noise with his mouth as she sits down.  When the team tells Ella to glitter their tower, Sugar gets mad, takes it, and does it herself.

Sugar looks at herself in the mirror in I Love You, Grease Pig, and grows more annoyed with Ella's obnoxious singing. She tells the team which positions to take for the race. When it is her turn to race the pig, she grows attached to it, and does not want to give it to Ella, but grows mad when the pig runs to Ella because ofher singing voice.

On Twinning Isn't Everything, she gets more and more annoyed with Ella's singing. She is about to throw the balloon at someone, but stops when she realizes it is Ella, holding a smiley balloon. She tries to talk to Sugar, which only annoys her even more. They both get covered in a paint balloon by Jasmine.

On I Love You, I Love You Knots, she pushes Ella off the log their team is sitting on, when there is no room for her. As the challenge goes on, she gets more mad at Ella, but when she has to confess her feelings for Sugar, it causes her to get up and ready to attack Ella, but she is held back by Shawn and Dave.

She is still mad at Ella in A Blast From The Past . When she is up to participate in the challenge, he and Samey run tup to one another anf fight eachother for a few moments, before Sugar is pushed off into the water. She cheers when Ella falls into the water. When her and Samey have to go for the final paddles, she wins the challenge, as the latter fights her newly returned sister.

On Mo' Monkey Mo' Problems, she laughs at Ella as she reveals that her heart os broken, receiving hateful glares form everyone after she laughs. When Ella tells the team that she cannot sing or she will be disqualified, Sugar smirks and tells Ella to sing to get the bear to follow them, as Chris was nowhere in sight. When the challenge is ending, she tries to tell Chris that Ella sang, but Sky covers her mouth. She performs the heimlech Maneuver to get the bear to throw up the monkey, and she stuck her hand in the monkey's mouth to get the coin. After a close call, she wins the challenge for her team. Chris reads the letter that Sugar sent to him during th elimination ceremony, and is thrilled when Ella is eliminated.

In This Is The Pits!, she is first seen complaining about Dave and Sky, which Shawn could care less about. She licks her hand as she pushes Dave off to wipe a blueberry smudge off Sky's face, and then eats the rest of the blueberries. She eventually gets sick, and throws up on Dave. She also burps in their faces, and eats a bug that provides light, which is shown in her stomach, and she uses the light rom her stomach to follow a path for her team.

In Sky Fall, Sugar starts an "alliance" with Sky, but betrays her. She causes Jasmine's elimination by accidentally pushing a tree on her

In Pahk'd With Talent, she raps so badly that Chris eliminates her on the spot.

In Lies, Cries And One Big Prize, she was not featured, as she was not picked as a helper, she was, however mentioned during the recap, due to her being eliminated in the previous episode. She is also seen on the T.V., with Sky and Shawn reacting in disgust.

Sugar in her audition tape.

Sugar falling from the blimp. 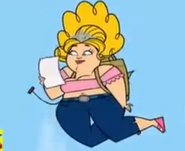 Sugar with her speech.

Sugar complaining about Ella and the fact that she is holding the glitter.

Sugar throwing the glitter on the wizard's tower. 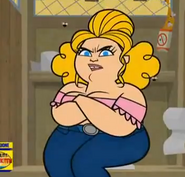 Sugar in the confessional 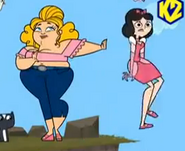 Sugar pushing Ella of the cliff in the intro

Sugar looking at Sky with her team.

Sugar angry in the confessional.

Sugar dancing after winning part one

Sugar in the final 7

Sugar's "craptry" song didn't impress Chris in her challenge, so she got eliminated and took 3rd place.

Add a photo to this gallery
Retrieved from "https://tdspoilers.fandom.com/wiki/Sugar?oldid=19055"
Community content is available under CC-BY-SA unless otherwise noted.