Shawn, labeled The Zombie Conspiracy Nut, was a camper on Total Drama: Pahkitew Island as a member of Waneyihtam Maskwak. He made it to the merge and later became a finalist along with Sky.

Shawn has spent his entire life training and preparing for a zombie apocalypse. His fear is so intense that he will become nervous the very moment one seems to be around, sometimes retreat without investigating fully, and even neglect to think about his own feelings.

On So, Uh This Is My Team?, he is saved from falling by Jasmine. He does not do very much in the challenge, but does contribute.

Shawn jumps off a tree to talk to Jasmine in I Love You, Grease Pig, before the challenge started. Shawn is the second in his team to compete in the challenge, as he and Topher have to zip line with their pig in their posession. He loses to Topher.

He is picking food for his team in Twinning Isn't Everything, and blushes when he speaks to Jasmine in the beginning of the episode, confessing his feelings for her in the confessional. He brings the food back to his team shortly after. When the challenge takes place,he takes it so seriously that he paints himself as a tree so he can camoflague.

Him and Dave go to pick food for their team in I Love You, I Love You Knots, and he pulls his teammate away when he sees Jasmine, as he is nervous around her. During the challenge, he is dared to squirt his boogers on someone, and he does it to Dave (to the chagrin of the latter), earning a point for his team.

On A Blast From The Past, he is sighing over Jasmine (who is sleeping on the branch away from the one he is on), but freaks out when he sees what appears to be a zombie (which is really Amy), causing him to run off in fear of a zombie apocalypse. Chef finds him in the woods and angrily brings him over to where the others are completing the challenge. He is forced to fight against Jasmine, and when he aggressively hits her too hard, which makes her mad at him for the rest of the episode.

In Mo' Monkey Mo' Problems, Shawn is seen crying in the confessional after Dave informs him he is making a picnic for Sky and himself. He tries to give Jasmine flowers right before the challenge starts, but she throws them on the floor, still upset about the last episode. He competes in the challenge with his team but does not do anything note worthy for the remainder of the episode.

He is shown to care less about Sugar's complaining in This Is The Pits!. He helps his team with the challenge, he does not do much else and has a minimal role, he is seen in the confessional once, remarking that it isn't good that someone let's a small thing take over there life, he was seen in the confessional later on, holding a diamond, one of ones they were told not to steal, he is in awe at it's shininess.

In Lies, Cries And One Big Prize,

Shawn and Team Maswak disappointed at losing the first challenge 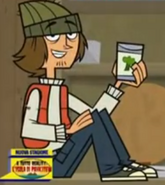 Shawn using the confessional for the first time.

First kiss of the season 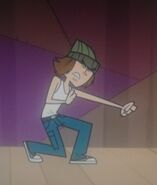 Shawn's talent (armpit farting)
Add a photo to this gallery
Retrieved from "https://tdspoilers.fandom.com/wiki/Shawn?oldid=21605"
Community content is available under CC-BY-SA unless otherwise noted.