Scarlett, labeled The Quiet Brainiac, was a contestant and one of the antagonists of Total Drama: Pahkitew Island as a member of the Pimâpotew Kinosewak.

She's nerdy, polite and super smart. She wears glasses but half way through its revealed they aren't real, they're just glass. She is described as evil and is 'Alejandro and Heather's' step child.

In So, Uh This Is My Team?, Scarlett works with Max to get materials for her team.

In I Love You, Grease Pig, she helps Max with his machine, as he could not build it himself. She uses food as bait to get the pig across the tires, and beats Ella in the challenge.

She once again works with Max in Twinning Isn't Everything. He tries to come up with many plans to throw balloons at others, but as he grows more incompetent, she rolls her eyes and gets annoyed with him. They both get covered in paint at the end of the challenge.

Scarlett finds herself being the next target of Rodney's affection in I Love You, I Love You Knots. In the challenge, we only see her putting makeup on a bear for a dare. She finds herself in the bottom 2 with Rodney, but she is given the last marshmallow.

In A Blast From The Past, she converses with Max before the challenge about a plan. When Max is up in the challenge, she sees him put a wire around his paddle, which she gets an eel and throws it to the metal on his paddle (throwing it with her paddle), and smirks when it causes Ela to get shocked and falls into the water. She is up against Sky, and she outmaneuvers the latter, who falls in the water, earning a paddle for her team. When the challenge is complete, she is referred to as an assistant my Max, and how she did a good job, which she lashes in the confessional about being referred to as an assistant.

She is shown to think that her teammates (especially Max) are incompetent in Mo' Monkey Mo' Problems. She is awoken by Max with a stick, and he yells at her to wake up. She grows more annoyed with Max as he proves that he is not useful, and especially when he leads the team to his own trap (the one she helped him build). It is clear she voted for him.

In This Is The Pits!, she wakes up to Max's yelling about the ants in his bed. She is stuck with Max for the challenge, as Jasmine and Topher drifted in another tunnel. She reveals that she wants Max gone, and ditches him the first chance she gets when a crocodile attacks Max, but he soon catches up to her, and the crocodile dies when rocks collapsed on it. She realized that the crocodile was an electric one, and took a piece of it, only for Max to throw it away, making her angry. She is glaring at Max as he is switched over to Team Maskwak.

In Three Zones And A Baby,she is seen studying her new teammate Sky.

In Scarlett Fever, she is disqualified alongside Max because she tried to blow up the island.

In Sky Fall, she was not seen but was mentioned in the recap, due to her elimination last episode.

In Lies, Cries And One Big Prize, she is not seen, nor mentioned, as she was not picked as a helper.

Scarlett in her audition tape. 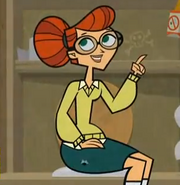 Scarlett uses the confessional for the first time.

Scarlett in the confessional.

Scarlett next to Max when his pants fell down.

Scarlett getting a marshmallow, while smirking at Topher, who does the same in return.

Scarlett figuring out the island is mechanical

Scarlett is angry at Max.

Scarlett with the other 4 merged contestants climbing a tree

Retrieved from "https://tdspoilers.fandom.com/wiki/Scarlett?oldid=13506"
Community content is available under CC-BY-SA unless otherwise noted.