Sammy "Samey" labeled The Cheerleader Twin(s), was a camper on Total Drama: Pahkitew Island, as a member of the Pimâpotew Kinosewak.

Samey is sweet and kind, unlike her sister Amy. She seems to make friends easily. She's always being pushed around by her sister, which results in her being good at taking orders. She's very naive as well but knows how to stand up for herself.

On the very first episode of the season, Samey clutches to her sister as they fall out of the blimp, to only be kicked off and used as Amy's landing. When she is placed on her team, she wants to switch, because she does not want to be with her sister. She has to get materials for the house they have to build for the challenge, and is used as a shield, so Amy won't get hit with tennis balls; all without her consent. Rodney picks them up and takes them back to their team.

She quickly befriends Jasmine in I Love You, Grease Pig, as she is forced by Amy to grab food for the team with her, and is stopped by Jasmine as she is about to eat a dangerous apple. Her and Amy have to work together in the challenge to get their pig from Topher to Scarlett, and the two argue the entire time, and Amy lashes out at her for getting them covered in mud. Samey gets overly mad at this, and complains in the confessional.

On Twinning Isn't Everything, she is sad about her situation with Amy, and Jasmine gives her a pep talk as they pick food. She eventually leaves her friend alone, as she talks to Shawn. When they are with their team at breakfast, Rodney accidentally calls her Amy, which annoys her, and eventually gets into an argument with Amy, which makes her look bad. During the challenge, she is arguing with her sister, and when Rodney shows up, she is shown to be annoyed and uncomfortable with him. Jasmine teams up with the two to do the challenge, but she argues with and pulls the ballon with Amy doing the same thing, and they lose the challenge, as the paint balloon breaks on all three of them. SaMey tricks Amy into eating a dangerous apple, and is happy when Amy is eliminated.

On I Love You, I Love You Knots, Samey puts a blueberry as it is a mole when she is picking food with Jasmine, so she can look like Amy. When Rodney approaches her, he falls in love with her (thinking she is Amy). For the challenge, she has to confess something (which is mostly about Amy), and she shocks some with what she said. Jasmine is helping her cover as Amy.

She is helped by Jasmine to act tough and like her sister Amy in A Blast From The Past, which is shown when she is up against Sugar for the challenge, and has to knock the other off, with them both fighting, but she is spared when a bear knocks Sugar in the water. She is paired up with Sugar again for the challenge, but she is stopped when her sister Amy is covered with dirt, etc and emerges out of the water. She is attacked by her sister, causing her to lose the challenge for her team. She is quickly eliminated with her sister, and both are cannoned out of the island.

Samey denies having a sister in her audition tape.

Samey being bullied by Amy in the intro.

Amy being rude to Samey before the game.

Samey being crushed after Amy falls on her.

Samey with her team

Samey, along with Amy and Topher, reacting to the moose stampede

Samey, in her pajamas, with Jasmine

Samey, and Amy, running with the pig.

Samey and the other contestants afraid of the pig, and is once again, used as a human shield from Amy. 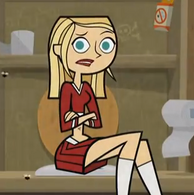 Samey using the confessional for the first time. 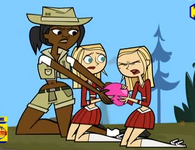 Samey, Amy and Jasmine fighting over a pink-purple paint-filled balloon.

Samey about to crack at Amy

Samey angry at Amy for ordering her around all the time. 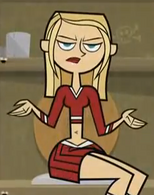 Samey in the confessional complaining about her sister.

Samey is surprised after seeing her sister's return.

Samey is finally eliminated; alongside her sister.
Retrieved from "https://tdspoilers.fandom.com/wiki/Samey?oldid=13987"
Community content is available under CC-BY-SA unless otherwise noted.