Start a Wiki
Max labeled The Super-Villain, was a contestant on Total Drama: Pahkitew Island, originally being placed on Pimâpotew Kinosewak before switching to Waneyihtam Maskwak in This Is The Pits!.

Max is obsessed with being the most diabolical mind Total Drama has ever seen. He is constantly boasting about being the personification of the word "evil."

On So, So, Uh This Is My Team?, he wants to make his evil presence known. He works with Scarlett in the challenge to get materials to build their house.

Max builds a machine (with Scarlett helping to fix it at first) in I Love You, Grease Pig, to use on the pig, to get it to sabotage the other team evilly in the challenge. It eventually broke when he rode it too fast, and causing the pig to fall, and the machine to crack.

Max does not do much in I Love You, I Love You Knots, but when he has to confessed something, he could not do it.

On A Blast From The Past, Max and Scarlett are interacting before the challenge, but they are cut off. He is up against Ella, and comes up with a plan with the help to Scarlett to put a wire on his paddle, and throw an eel, so he can shock someone. He does this with Ella, and causes her to fall in the water. He is up against Ella again later in the challenge, but has bad luck this time, as a bear throws him in the water. After the challenge is complete, he thanks his assistant Scarlett, which does not sit right with her.

Max wakes up Scarlett by yelling and poking her with a stick in Mo' Monkey Mo' Problems. He talks to Scarlett about their alliance, and he makes a trap during the challenge with her help. He is not much of good help in this episode, as he failed in almost everything his temamates were doing. He even leads his teammates to the trap that he created, causing them to be trapped. When they do escape and lose the challenge, he is eliminated, which he lashes out at, but is spared when Chris disqualifies Ella.

In This Is The Pits!, he is annoyed and freaked out about the ants on his bed (which Scarlett probably put them there) and kills some of them with a magnifying glass. During the challenge, his team splits apart, and he is stuck with Scarlett for the rest of the challenge. He ends up being bitten by an electric crocodile, and Scarlett ditches him, to only catch up with her soon after. He throws away the electric piece Scarlett took from the crocodile, as they entered an elevator. During the bonfire, Chris tells him that he is switching with Sky, (calling him and Scarlett a couple, much to Scarlett's shock and displeasure) meaning Max is a member of Team Maskwak.

Max in his audition tape.

Max in his audition tape.

Max and his team sleeping.

Scarlett is angry with Max. 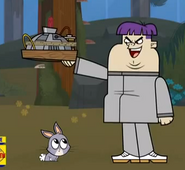 Add a photo to this gallery
Retrieved from "https://tdspoilers.fandom.com/wiki/Max?oldid=20158"
Community content is available under CC-BY-SA unless otherwise noted.