I Love You, Grease Pig is the second episode of Total Drama: Pahkitew Island.

Jasmine wakes up to pick up food, but Amy does not want to go, so she forces Samey to go to pick food with Jasmine. Leonard is going on with his roleplaying, which creeps some of his teammates out. Sugar grows annoyed with Ella`s singing when she holds a mirror for Sugar to look at. Jasmine and Samey grow a bit close as they pick for food, and stops Samey from eating an itchy/poisonous apple. Shawn is up on a tree, and talks to the two ladies. Samey soon walks off, and the two contuinue to talk.

It's time for the second challenge and Chris has the teams race pigs through greasy tracks, and each team member has to pass the pig to the other, as the last person on the team has to cross the race Topher likes what Chris is telling him. Rodney starts to make a move on Jasmine, but when Amy punches his stomach, his cheeks get blushy and he starts to fall in love with her. Jasmine quickly leads the challenge again, and Sugar tells the team which positions for the team to take, with Leonard being the one to finish the team off to victory. Sky beats Rodney with carrying the pig across the slippery walkway, as she passes it to Shawn, and Rodney loses his footing and lands in his groin, hitting his "biscuits" and passes it to Topher, with him starting to close the show off for a commercial, which irritates Chris. Max builds a machine, and Scarlett watchs him.

Sugar feels at home with the pig, and beats Amy and Samey (with the latter being pushed around by the former). She is supposed to pass the pig to Ella, but she feels attached to it, and grows mad when the pig follows Ella to hear more of her singing. Amy and Samey argue as they are both covered with mud. Scarlett uses food to bait the pig to cross the tires, and beats Ella across the tires (as she is having too much fun singing and dancing with her pig).

They pass their pigs to Dave and Max, and Dave does not want to touch the germ covered pig. Max uses the machine on the pig to slow down the other team, which leaves Dave to beat him and to put the Maskwaks ahead. After he is done with the pig, he starts to have a panic attack about needing to disinfect, and Sky calms him down, which causes Dave to smile and to grow feelings for her. Max`s machine breaks, and Jasmine tames the pig. Leonard and Jasmine are the last ones to finish the challenge, but Leonard stalls as the pig is supposed to use magic to finish the challenge, which Dave yells at him over. Jasmine quickly beats him, and wins for the Kinosewaks for the second time.

After their win, Rodney runs to Jasmine, whom is talking to Samey, and runs away sobbing, as he feels rejected. Team Maskwak is brought to their second elimination ceremony, and Leonard and Ella are put in the bottom two, with the former being eliminated for losing the challenge. Sugar is the only one who will miss Leonard, as he gets shot out of the Cannon of Shame , and she has tears in her eyes.

Amy talking to Jasmine at the beginning of the episode.

Amy in the confessional.

Sugar displays her dislike for Ella. 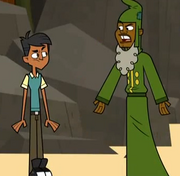 Team Maskwak cheering and encouraging one another, thanks to Sky.

Samey almost eats a dangerous fruit, but is saved thanks to Jasmine. 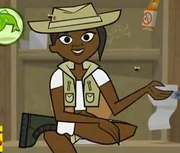 Jasmine talks about Shawn in the confessional.

Chris informs the contestants of the challenge.

Rodney starts to fall in love with Amy.

Maskwak figuring out how to complete the challenge.

Sky and Rodney before the challenge.

Max shows his invention to Scarlett.

Chris gets angry at Topher for trying to take his lines.

Sugar displays an unusual liking to the pig.

Amy and Samey running with the pig.

Samey shows anger for Amy pushing her around all the time.

Samey complains about Amy in the confessional. 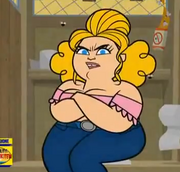 After Ella takes the pig from Sugar, Sugar complains about her in the confessional. 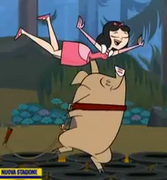 Ella and the pig work together to make it through the tires.

Amy gets angry at Samey. 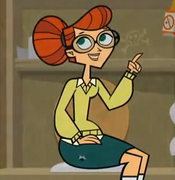 Scarlett in the confessional. 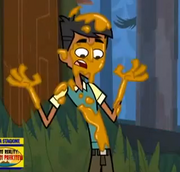 Dave gets covered in grease after the evil pig throws it at him.

Sky comforting Dave after he gets cover in grease.

Dave starts to develop a crush on Sky. 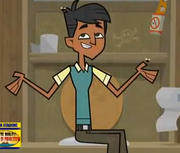 Dave in the confessional talking about Sky. 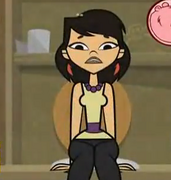 Sky states in the confessional that she is more interested in the game than in Dave.

Jasmine hypnotises the pig after it becomes intimidated by her. 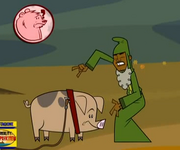 Leonard attempts to use 'wizard powers' on the pig.

Jasmine wins the challenge for her team.

Kinosewak cheer after winning the challenge.

Maskwak in a cave before their elimination ceremony.

Maskwak at their elimination ceremony.

Leonard is announced as the eliminated contestant, much to Sugar's disappointment.

Leonard right before he is cannoned.

Amy punches Rodney in the stomach.

Rodney's cheeks getting blushy while falling in love with Amy.

Rodney landing on the ground on his stomach.

Rodney's final confessional in the episode.
Add a photo to this gallery
Retrieved from "https://tdspoilers.fandom.com/wiki/I_Love_You,_Grease_Pig?oldid=21593"
Community content is available under CC-BY-SA unless otherwise noted.